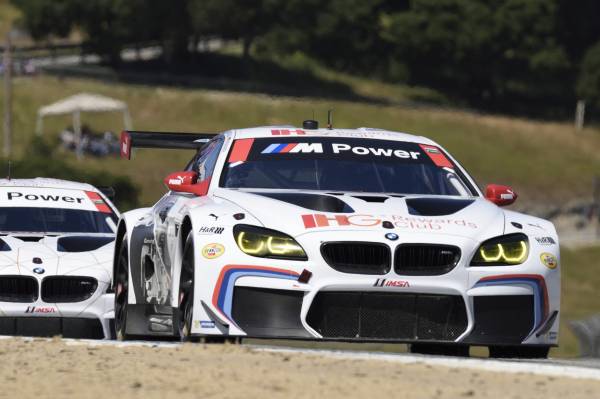 Bill Auberlen and Dirk Werner, driving the No. 25 BMW M6 GTLM, finished ninth, 1.256 seconds ahead of the No. 100 M6 co-driven by John Edwards and Lucas Luhr in tenth place. Both cars completed 78 laps of the 2.238-mile, 11-turn Laguna Seca circuit during the 120-minute contest. The race was won by the No. 67 Ford GT of Ryan Briscoe and Richard Westbrook.

“The race was really disappointing for everyone,” said Bobby Rahal, Team Principal.“We were searching for the set up for this new tire, but we couldn’t find it in the time we had. Everybody deserved better, but now we have two tests at Watkins Glen, so we can take this tire and actually start understanding it so we are more competitive at the next race there.”

Bill Auberlen, driver No. 25 BMW M6 GTLM (9th): “Today was not our day, but we will be back at the front of the GTLM field sooner than later. A race like this one just makes BMW’s next success that much sweeter.”

Dirk Werner, driver No. 25 BMW M6 GTLM (9th): “We had a difficult weekend. The speed gap we had from the beginning we faced in the race as well, so we couldn’t really fight for positions. I pitted quite early in the race and had luck that a yellow came out. Everyone else pitted so that moved us to the front - at least for a little while. Driving for maybe eight or ten laps in P1 was the best part of the race for me. Ultimately, we just didn’t have the pace for better results.”

John Edwards, driver No. 100 BMW M6 GTLM (10th): “It was a really hard race. We knew it was going to be difficult from Friday when we first got onto the new tire. Obviously we didn’t find a good way to adapt to it. Fortunately we have eight weeks to the next race and a couple of test days, so we can find our way. We tried to go off strategy with the yellows and I saved a lot of fuel so we could go to the end. That strategy was really a good one as we got ahead of the cars we were racing with, but at the end we were just too slow to stay ahead of them.”

Lucas Luhr, driver No. 100 BMW M6 GTLM (10th): “The weekend ended as it started - disappointing. In terms of performance, both of our cars were never able to fight or compete with the others. I think the break over these next few weeks will do us a lot of  good and I am sure we will get it sorted out. As always in racing time is ticking a little bit against us, but there is no point having our heads down. We have to put our heads together, improve and come back stronger.”

Round Five of the 2016 IMSA WeatherTech SportsCar Championship, the Sahlen’s Six Hours of the Glen, will be held at Watkins Glen International, in Watkins Glen, NY, on July 3rd. The race will be broadcast live on Fox Sports 1 beginning at 10 a.m. ET. Follow BMW Team RLL on Twitter at @BMWUSARacing for “from-the-pit-box” updates all weekend.