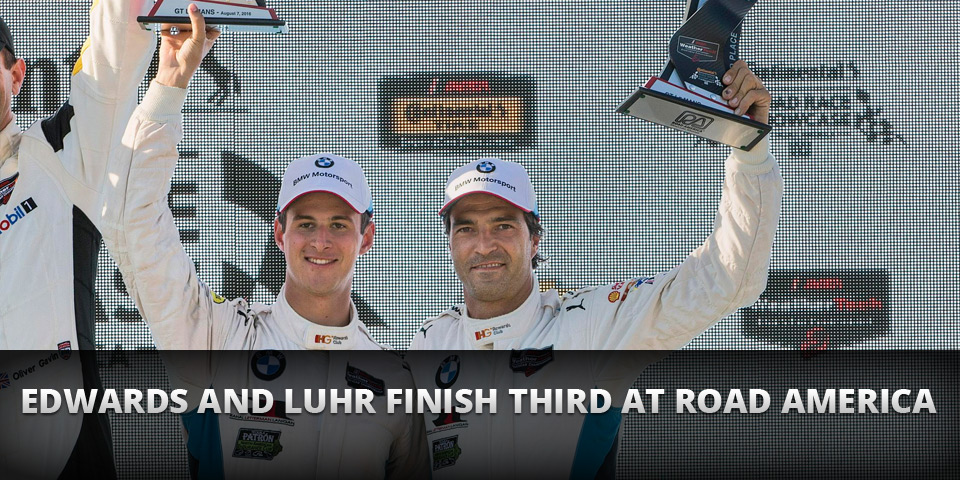 8th August 2016.   After starting at the rear of the entire 41-car field in the IMSA WeatherTech SportsCar Championship Continental Tire Road Race Showcase, the two BMW Team RLL BMW M6 GTLM cars finished third and eighth in the GTLM class. John Edwards (US) and Lucas Luhr (DE), driving the number 100 car, had a strong day to finish third, scoring the duo’s first podium of the season and the 60th podium finish for BMW Team RLL since 2009. Teammates Bill Auberlen (US) and Dirk Werner (DE), driving the number 25 sister car, finished eighth. The GTLM class win went to the number 4 Corvette.

After both cars had been relegated to the back of the grid due to an infringement of the rules in qualifying, Luhr, starting the number 100 BMW M6 GTLM, and Auberlen, starting the number 25 car, took the green flag in positions 40 and 41. However, by the fifth lap they had passed the GTD class leader with Auberlen in front of Luhr, and then the fight to move back to the front was on.

Bobby Rahal (Team Principal BMW Team RLL):   “I think we have to feel pretty happy, given where we started. It was a trouble-free race for us and we were able to take advantage of some mistakes by others. After the bad luck at Lime Rock we have recovered. All credit for the team for changing the cars so quickly. So now on to the next one at VIR.”

John Edwards (Number 100 BMW M6 GTLM, 3rd place):   “It is not fair to say we haven’t had pace throughout the year, but we have had a ton of back luck. We had a pretty good fight going on with a couple of cars and the way the race was unfolding towards the end I thought we had shuffled back a bit, but the last yellow bunched everybody up. It was a bit of chaos but we came out the other side with a podium. I really enjoyed this race and it is great to get some champagne again.”

Lucas Luhr (Number 100 BMW M6 GTLM, 3rd place):   “Finally we have a good result, even if it was a little bit lucky at the end. But over the weekend we have been on pace and had performance, apart from in qualifying. I think finally now the monkey is off our back. For everybody in the 100 crew this is great, as we were getting frustrated. For all of us today was the day.”

Bill Auberlen (Number 25 BMW M6 GTLM, 8th place):   “Congratulations to the 100 car. They did an excellent job. It was one of those weekends when we were on the back foot from the moment we got here, and we never quite got our stride. Every little thing that could go the wrong way did, but this team never quits.”

Dirk Werner (Number 25 BMW M6 GTLM, 8th place):   “It was a tough day for Bill and me. We didn’t have a good start to the weekend and this kind of went through to the end of the race. There was a situation where we tried something and were hoping for some luck when we pitted early, but it didn’t work out. For sure this weekend was very difficult, but it was good for the team to get a podium with the 100 car.”